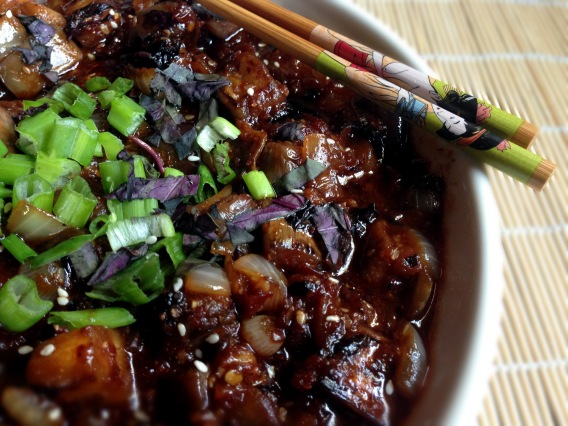 My debut novel is out!  Check it out!  I think it is HILARIOUS!  I hope you will, too!

Very quickly – let me report a story of frustration, disgust, financial devastation & simple kindness.  In March, while I was celebrating an anniversary of sorts in Memphis with this shady character, 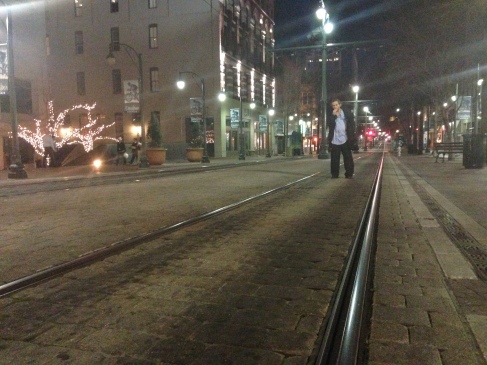 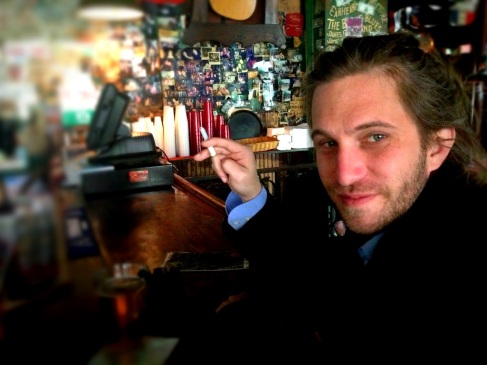 my housesitter reported that the tub had backed up with black sludge & wasn’t draining at all – even over an entire day.  I had been out of town for a week already & was remaining away for nearly another week which meant he had to handle the plumber situation for me.  I got a great referral & the plumber fixed the problem for $650 but left my dining room looking like this.

A few months later, another bathroom on a lower floor also began to back up but, this time, with raw sewage.  Ugh!  When the same plumber came to deal with that issue – he noticed I had hung a piece of art over that hole in the dining room wall.

“You haven’t repaired that hole yet?”

“You might just want to leave that art there then.  Because it is just a matter of time until I will need to get back in there.”

Say, what?  I had all the plumbing replaced on this house when I bought it 16 years ago.  Why should I be facing recurring issues like this?

He mumbled something about “old pipes” and went to the yard to access the clean out thingy & snake the main line.  Lots of drama & a high pressure water thing & the house seemed restored.  This was another $500.  The work was guaranteed for 6 months.  Six months & two weeks later – the sewage problem recurred – this time – flooding a carpeted room with the foulest waste and dumping said foul sewage into my yard, too.   Good-naturedly, he fixed the pipe again & for free, but I still had to get Stanley Steamer out to salvage the carpet and I did a bit of human waste removal myself in the yard so that it would be safe for dogs.  YUCK!  He gave me a long sob story about his truck getting stolen with $50K worth of tools in it that were uninsured.  For this reason, he was unable to give me any real estimates on my options to more permanently solve my “roots in the pipe” plumbing issue.  He told me to call him in a few weeks & said that when he had replaced his equipment – he would come bid options like some resin coating that is guaranteed for 30 years but costs $100 a foot (and my line to the main sewer is over a hundred feet long, easy, even by my own estimation).  I’m not sure if I can think of a less sexy way to spend $10K.  $10K spent INSIDE my house would make this place feel like I had moved up in the world.  I could change/fix everything that needs it so badly – from floors to painting to tile repair.  But spending $10k for underground pipes, more than half of which are under my neighbor’s yards & under the sidewalk & street – well – that just feels like losing it in a fire.

Fast forward 6-8 weeks from that SECOND repair job.  Oh no!  Raw sewage again – in both the lower bath & the yard!  Criminy!  I called my plumber.  Oh, yeah – he is on vacation because he is getting married this weekend.  “Call Mike Diamond.  They will charge you $99,” he says & hangs up.

Yeah, well, Mike Diamond wanted $350 to clear the line with ZERO warranty.  I complained.  They said I should call Roto Rooter.  I did.  $450 – but with a 3 month warranty.  So – I did that.  And then because the repair guy seemed SO nice – I asked him to bid a more permanent solution because, at this rate, I’d need emergency repairs every three months at $500 a pop.  He ran a camera or something and came back & said that the bad news was that a section of pipe was nearly destroyed by roots & the issue would definitely keep repeating but the good news was that the damaged pipe was in an easily accessible area of my yard – rather than under a deck or something in my neighbor’s yard.  The cost to fix it?  $3600.  And that resin stuff that my other plumber said costs $100 a foot – Roto Rooter does for $50 foot but, it seems, I have 183 feet of pipe to reach the city sewer.  That would be a $15,000 job!

So – I bite down hard & agree to the $3600.  They were here yesterday in sweltering heat, digging a trench & cutting roots & whatever else they do.  At lunch time, the repair guy knocked on my door & said they were going to lunch.  He asked if I cared to join them.  I said thank you, but no.

After some back & forth with him – with me declining all offers of food – he asked, “If you get Chinese – what do you order?”

An hour later – he delivered a piping hot container of shrimp fried rice to my door!  Can you believe how sweet?  I had it for lunch & dinner yesterday.  And I nearly cried into it – overcome by disproportionate gratitude that someone out there saw that I needed a weency bit of kindness.

And, when the work was done, he brought this pipe to my door to show me the problems. 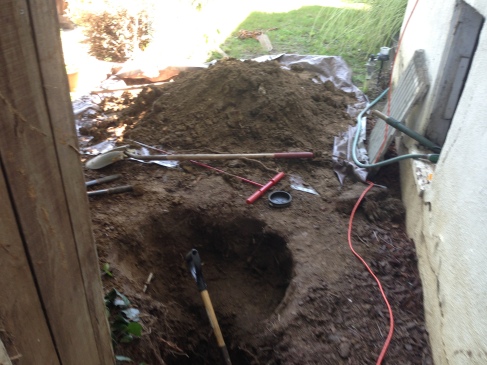 Look at the image of the roots!  Am I supposed to believe that those grew like that in just the last 6-8 weeks since my plumber was last here?   I asked the Roto Rooter guy.  Years, he said.  Years.  And there is no way it had been cleared in the last two months – let alone twice in the last 8 months.  He believes my old plumber was just meting out temporary fixes to either keep making $500 every six months off of me or to get me so panicked that I went for a far more costly repair.   When I mentioned that I had been told to leave the dining room wall open for future access he said, “Uhm – isn’t that a red flag for you?”

And so there you have it.  I’m $3600 poorer but I had a lot of shrimp fried rice for that money.  And my new guy said that the warranty on the drainage for the entire line would be for a year.  He also told me to call him in 11 months & he would do a “warranty servicing” on the pipe for free – as the work would still be covered – thereby extending the one year warranty to two.  Aw!  See?  There are still nice folks out there and, right about now, I REALLY needed to cross paths with one. 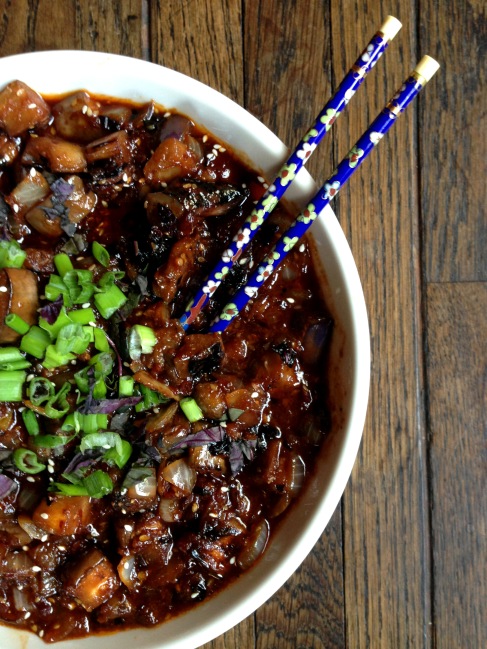 This dish is SO easy & outrageously delicious!  It is also genuinely spicy but you can control that level yourself.  I used Japanese eggplant – at least I think they are Japanese.  They are long & thin – like a forearm.  You can use any kind you find available.  With rice, this would feed two people very well. 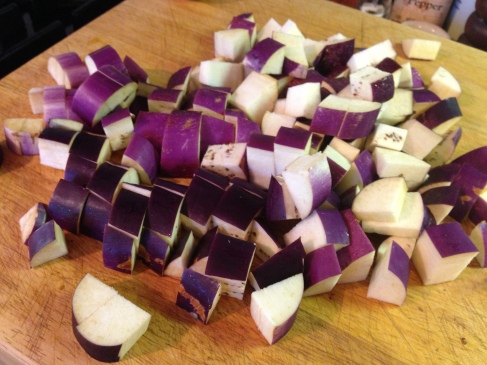 One reader recently expressed disgust with the quantities of oil & soy sauce I used in this.  If you are looking for a lighter dish with less sodium – use a low sodium soy sauce ( I ALWAYS do) and/or use less of it & cut the oil to the minimum required to cook each step of the recipe without it getting too dry or burned.  In fairness – there really is a generous amount of oil in my directions below & cutting it down won’t hurt flavor much – if at all.

Heat 2-3 TBS sesame oil in a pan & add the eggplant.  Add a little salt & some crushed red pepper.  Saute over medium heat until tender but not mushy.  Maybe 5-8 minutes.  Set aside in a bowl.

Using the same pan, heat 1 TBS coconut oil & saute the onion with a bit of crushed red pepper.  When soft – add to the bowl with the eggplant.

Serve over rice garnished with additional chopped basil, the scallions & some additional sesame seeds.  Drizzle with a small amount of sesame oil. 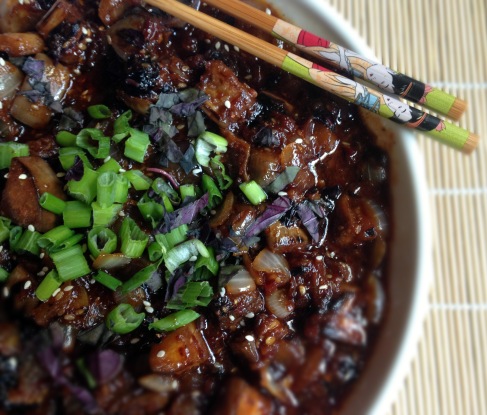