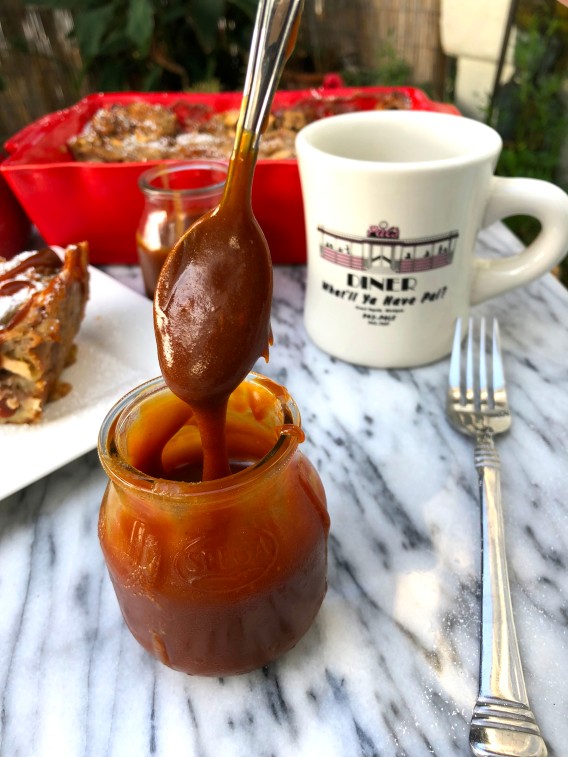 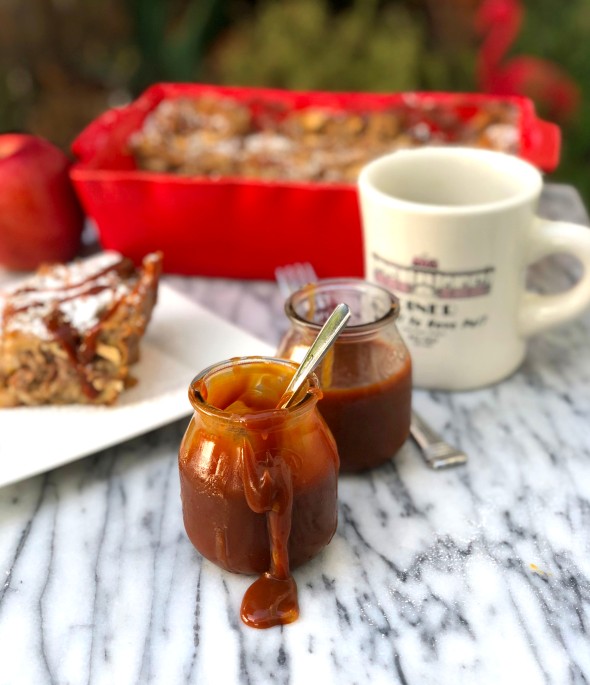 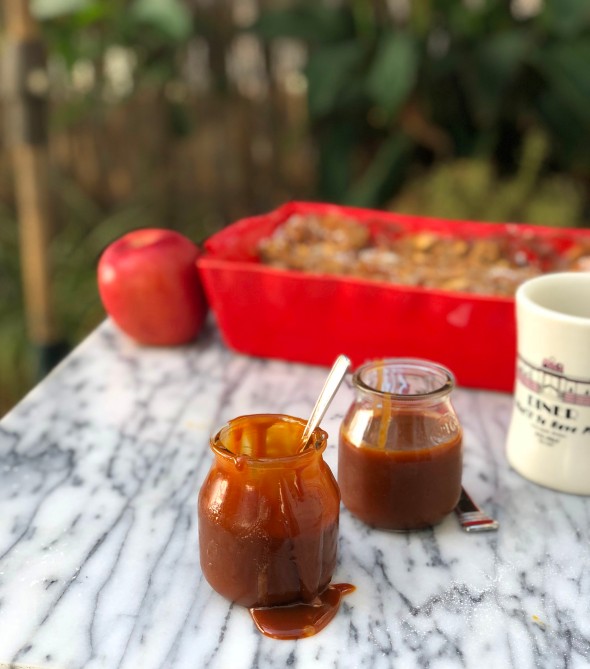 Over med-low heat, heat the sugar – whisking constantly so it does not burn.  It will start to clump up then eventually melt & start to brown.  Whisk in the butter until it melts then add the milk.  Boil a bit until it thickens.  Add the salt & remove from heat.  Allow to cool.  Store in the fridge.  It should be good for several weeks. 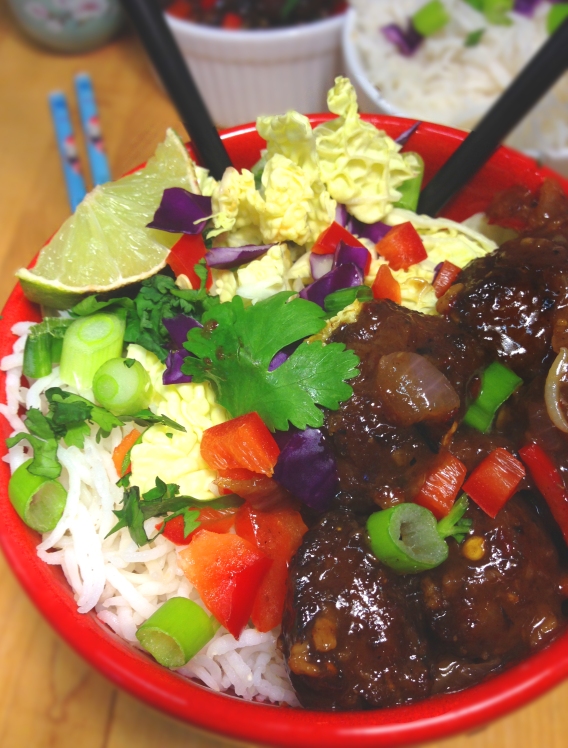 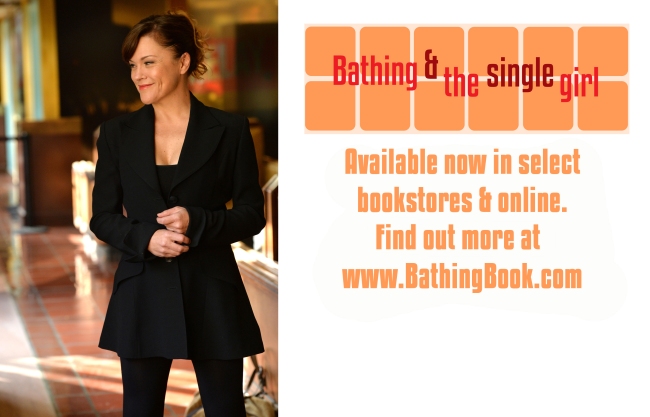 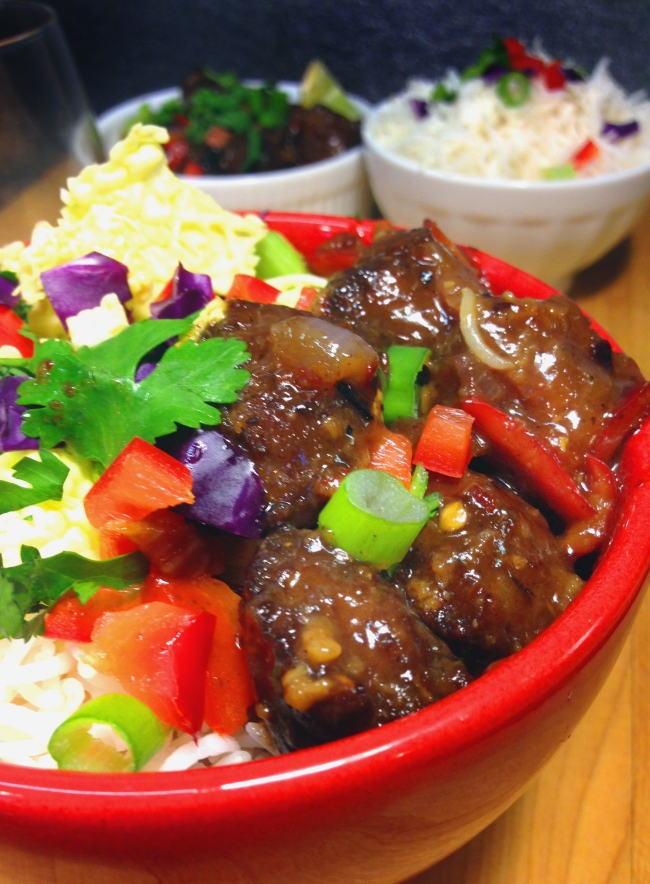 This is a dish traditionally prepared with pork.  You might think that a faux chicken would be a closer thing to pork that faux beef and you would probably be correct.  But – I have been using faux chicken a lot lately & decided to mix it up a bit.  If you make this dish – any faux meat would be fine & a faux chicken would certainly be prettier to photograph.

I was going to use this Trader Joe’s stuff – 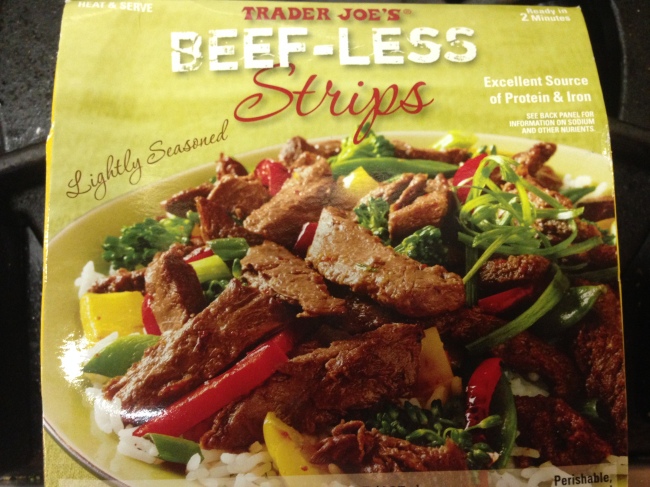 but then I remembered I had this stuff in the fridge & opted instead to try it. 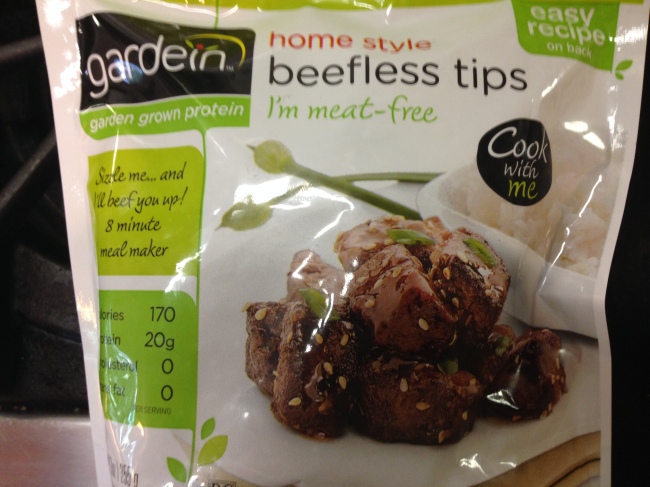 I thought the cube-style rather than a strip-style beef would be better for this dish.  But, Gardein proved underwhelming, yet again.  My complaint with the Gardein products is that the bulk of them are “breaded” or have some kind of bready texture on the outside & that even these beef cubes, while not bready, proved to have a fragile consistency that would never hold up in a stew or something.  And the texture is NOTHING like meat when you chew it.  It just sort of crumbles.  So – my suggestion is, if you are going to make any of the faux beef things I post, use the Trader Joe’s stuff instead.  Beyond Meat makes a faux beef, apparently, but my local grocery store doesn’t carry it so the jury is still out on that version.

I am posting a beef bowl serving suggesting here but you needn’t get all the stuff for that if it sounds like a pain in the ass.  Just serve this shit over rice & scarf it down.

Oh – and I apologize for the photos.  Dark beef items are really hard to make look pretty.  Do not be thrown, however – because this is far yummier than it looks! 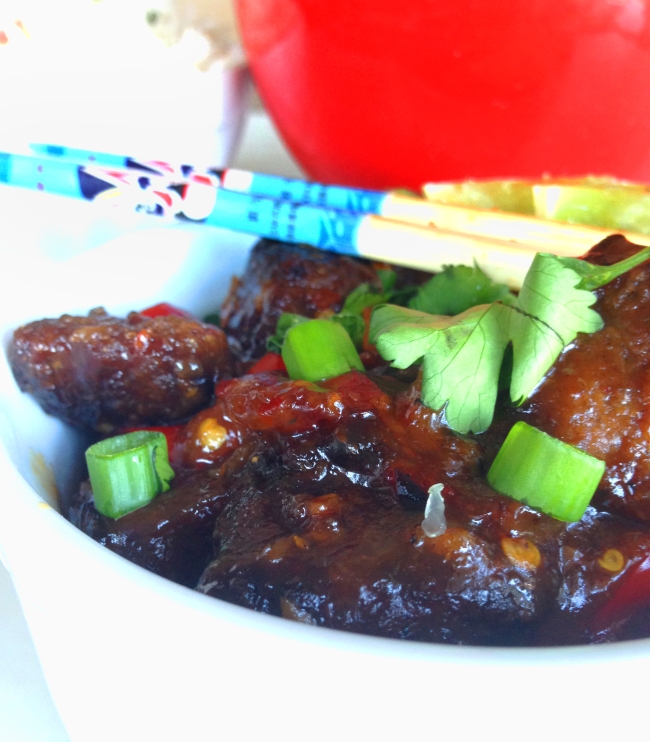 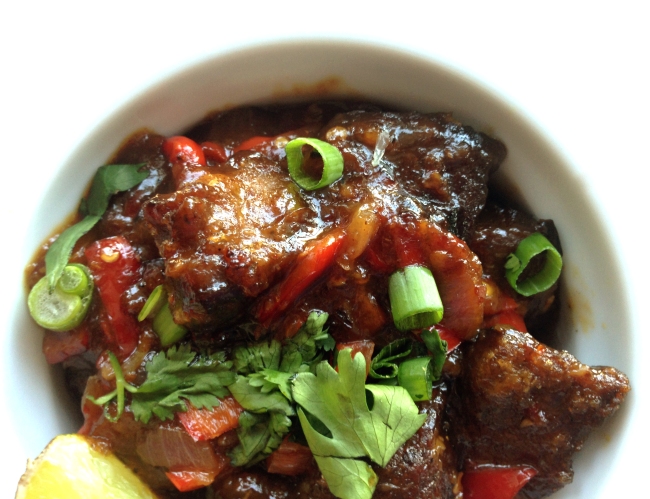 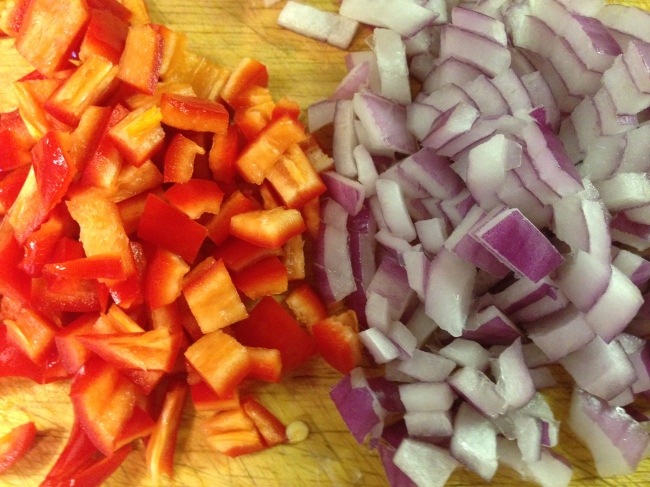 Toss the meat in enough cornstarch (and some S&P) to lightly coat it.  Set aside. 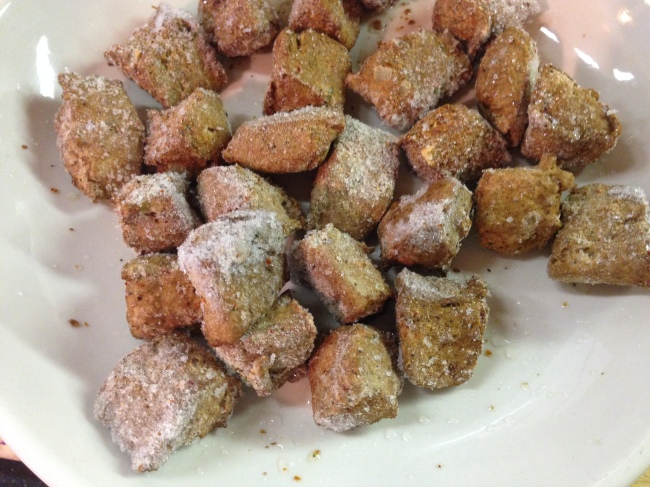 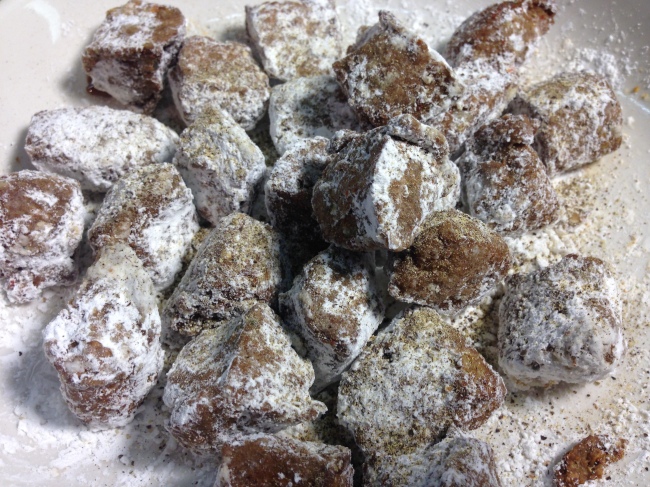 Prep the onion or shallot, the garlic, ginger & jalapeno (or other pepper) and set aside.

Slice the other veggies & have them on hand.

Spread the brown sugar on the bottom of a dry pan over medium heat – and leave it undisturbed until it melts.  Then stir it with a wooden spoon until it caramelizes.  Be VERY careful not to burn it. 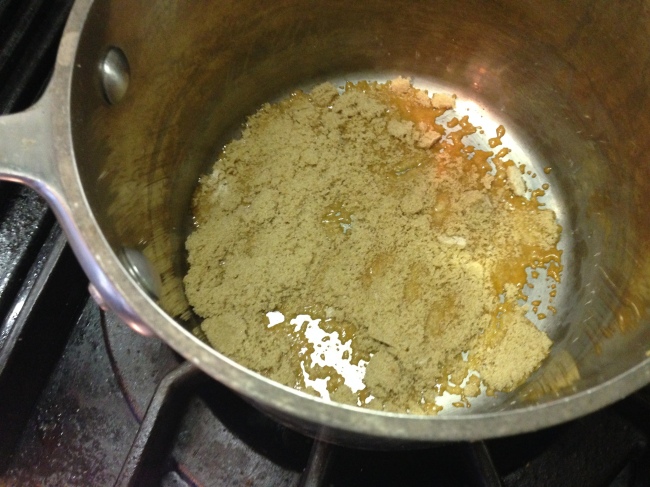 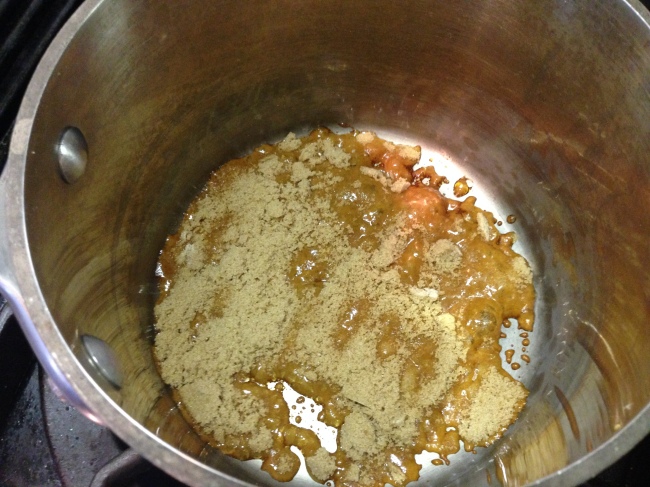 Take the spoon out of the pan & VERY CAREFULLY add the stock mixture to the pan.  Be very careful not to burn yourself.  That molten sugar isn’t fucking around.  The caramel will instantly harden so stir again with a wooden spoon over moderate heat until it melts again & the sauce begins to thicken.  Set aside on lowest possible heat.

Heat the sesame oil over med-high heat & fry the meat up.  I used a lid to press it against the heat.  When it is browned on all sides, put in in a bowl & set aside. 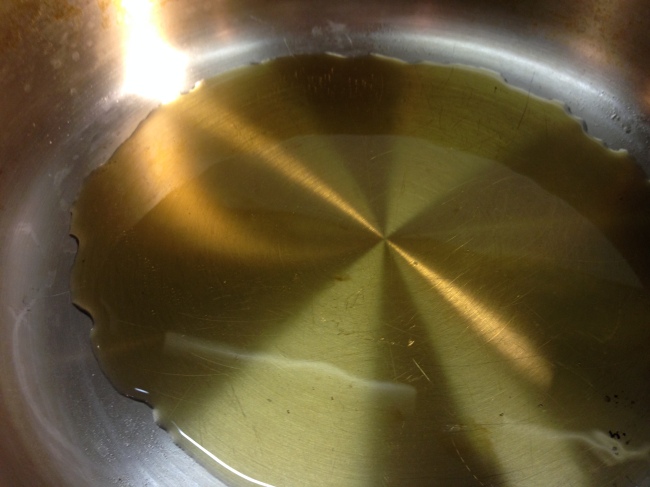 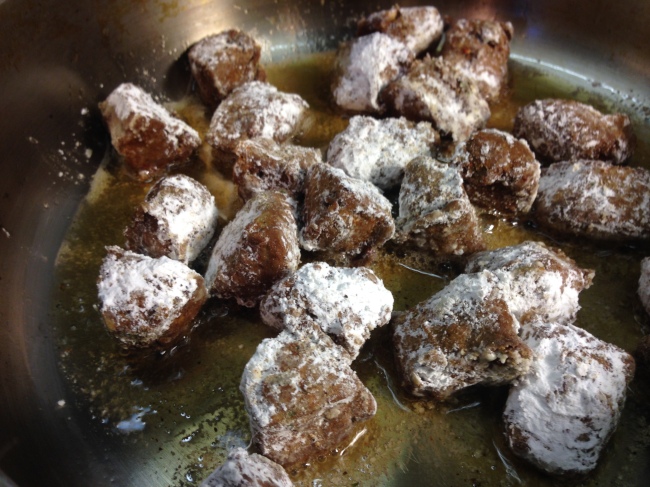 If you need a little more oil in the pan add it & saute the red or green jalapeno & the onion (or shallot) for a few minutes or until tender.

Add the ginger to the pan with the onion & jalapeno.  My ginger was jarred & wet & spattered everywhere so be careful.  Saute this about a minute & then add the garlic for about 30 seconds. 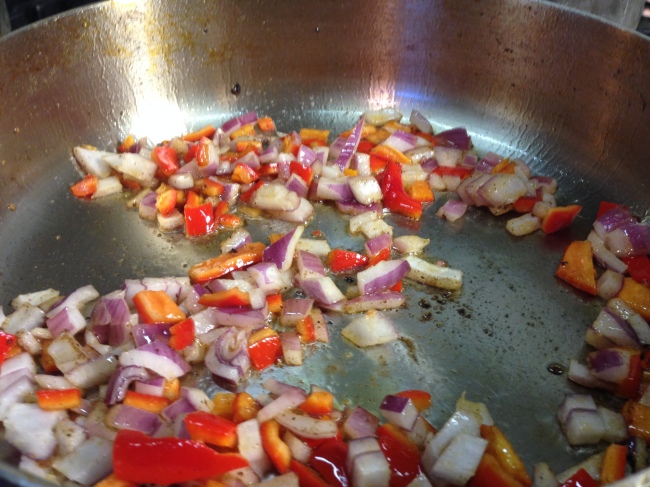 Now – a tricky part.  Add the stock to the saute pan.  It will likely splatter a bit so do this carefully and at arm’s reach.  Bring to a boil & then reduce to a simmer.  Add the slices of red pepper & the faux beef & heat through. 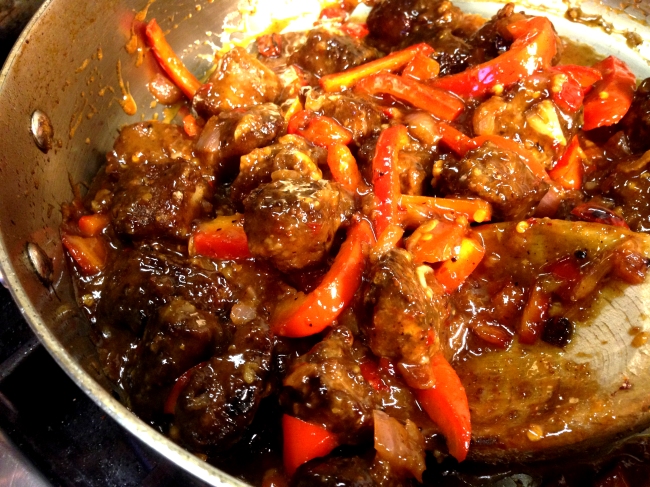 Now – either serve this over rice with some scallions & cilantro or create a beef bowl by layering rice & then meat & then the chopped raw veggie – and maybe some toasted nuts & sesame seeds on top – squeeze a bit of lime & go to town! 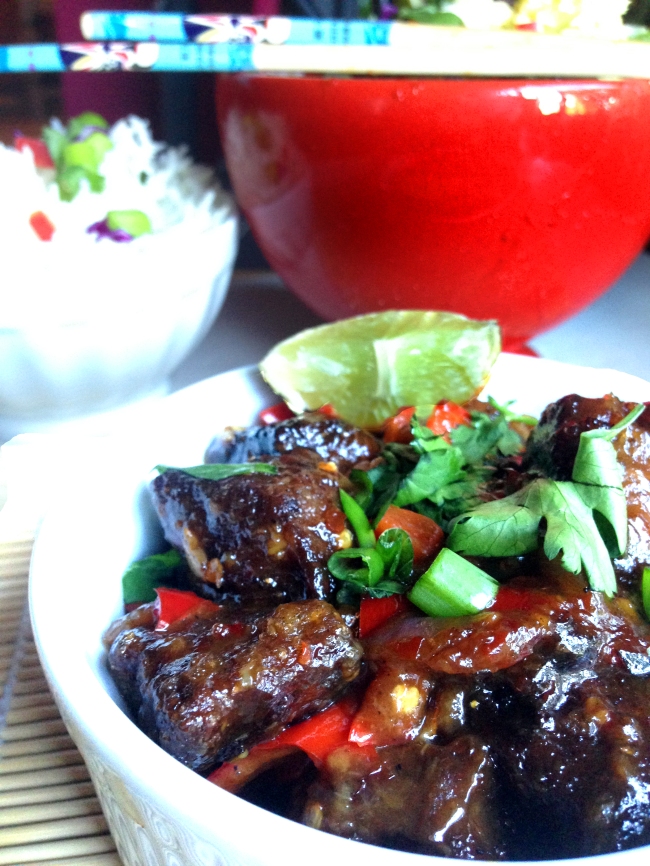 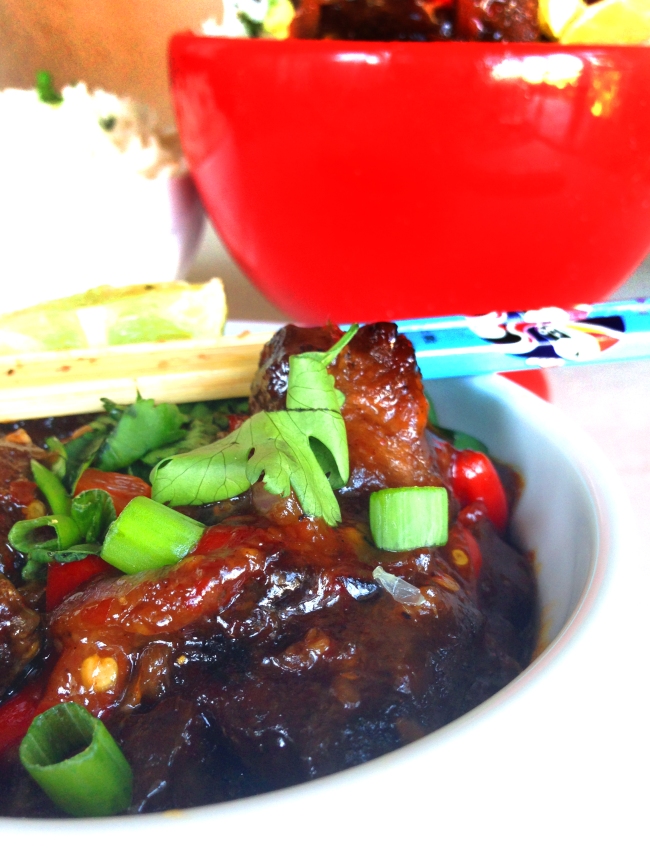 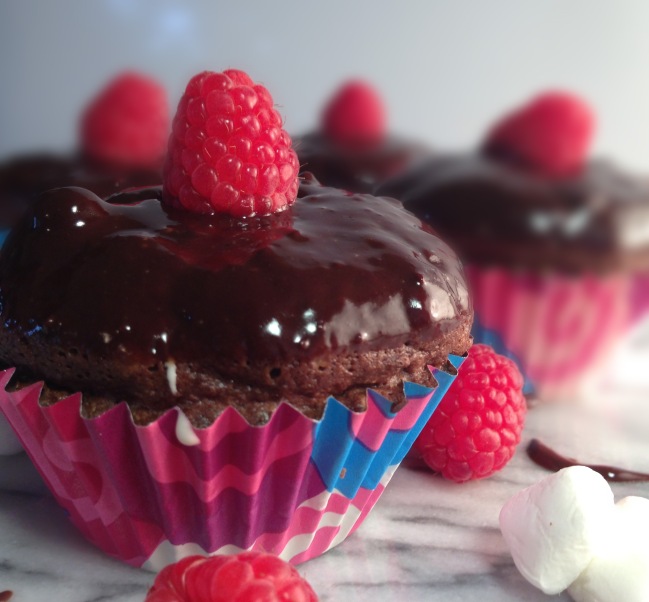 OK, kiddies, it was my friend Alyse’s birthday this week & I hosted a little dinner for her.  And I made CUPCAKES!  I seldom eat dessert foods myself – mainly because I prefer to get my sugar from a wine glass – so I have posted precious few dessert recipes.   But a birthday certainly called for a dessert item so I seized the opportunity.  Please know, I am not part of this whole cupcake craze but cupcakes really are a superior choice for birthdays (in my opinion) as they are a reasonable serving size & you can kinda mix up the flavors a bit more than one can with a cake.  And they travel easily.

For these guys, I had a huge, industrial-sized box of brownie mix:

Then I went to store & bought everything I could think of that I might want to use for brownies including eggs & powdered sugar & cream cheese & pudding & jimmies & sprinkles & raspberries & marshmallows & marshmallow fluff & Reese’s Cups & two kinds of frosting etc etc.   Then I realized I was only feeding four people so there was no need to make 4372 cupcakes.  After some consideration, I elected to make the cupcakes from the brownie mix – and chose to top some with peanut butter frosting & drizzle caramel sauce on them & salt them.  Others – I filled with a marshmallow fluff center & a raspberry inside & atop the chocolate ganache frosting.   Unfortunately – the one cupcake I cut into for the photos had an anemic amount of cream – or maybe the cream was inserted off-center so it is hiding in the photo.

But know – I sent the bulk of these cupcakes home with my friend Rose for her teenage sons & I saw a photo she took of one & the center was creamy, indeed.   Here is that photo:

All I know is, I injected a bunch of cream in them & then they settled – leaving a gap in their volcano openings – so I rammed a raspberry inside each of them.  Indelicate but delicious!

For the peanut butter frosting

1/2 cup butter (or lard or shortening)

Make the brownie mix as per box.

For the frosting – blend all but the powdered sugar ( I did this in my food processor).  Then I added the sugar.  Start with 2 cups & test for sweetness.  Add more – if you think it should be sweeter. 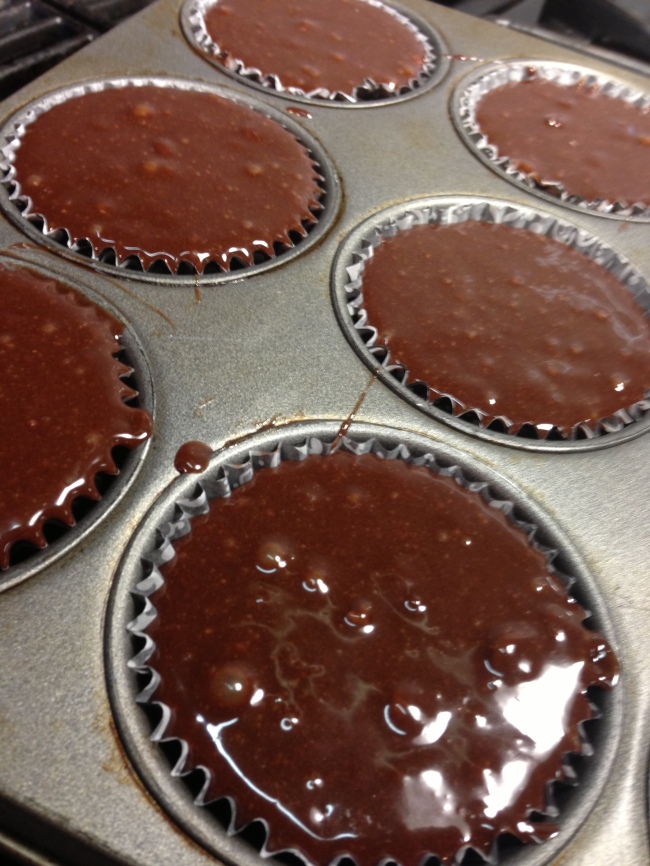 To assemble, I lined a cupcake pan with liners, put a tiny dollop of brownie batter to just cover the bottoms, put a Reese’s Cup in each & then topped with more brownie batter.  Bake them according to box instructions.  Then, frost them with the peanut butter frosting.  Drizzle the caramel on them, lightly salt them & top with a peanut.  Put them on the ground and roll around on them naked.

Or serve them to your friends.  Your call. 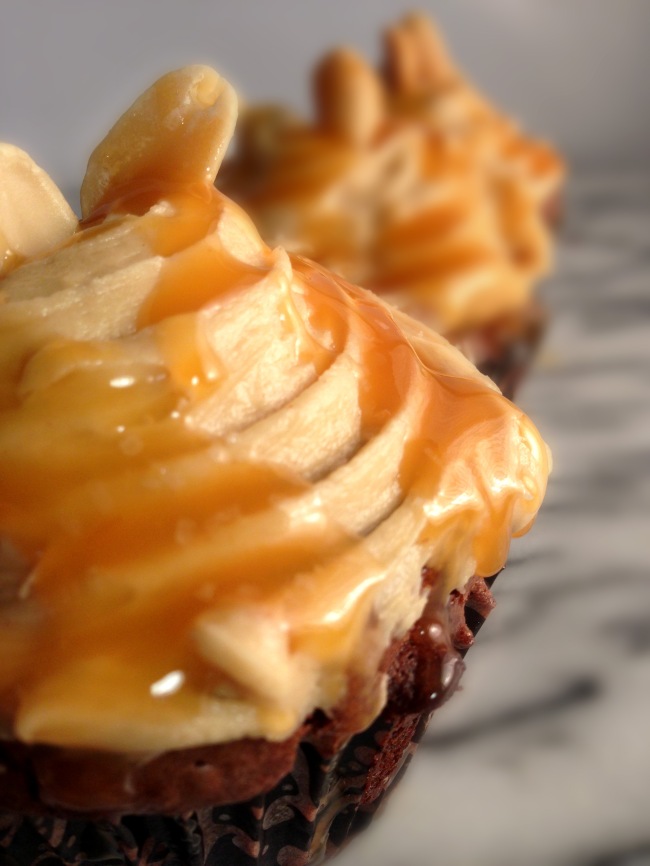 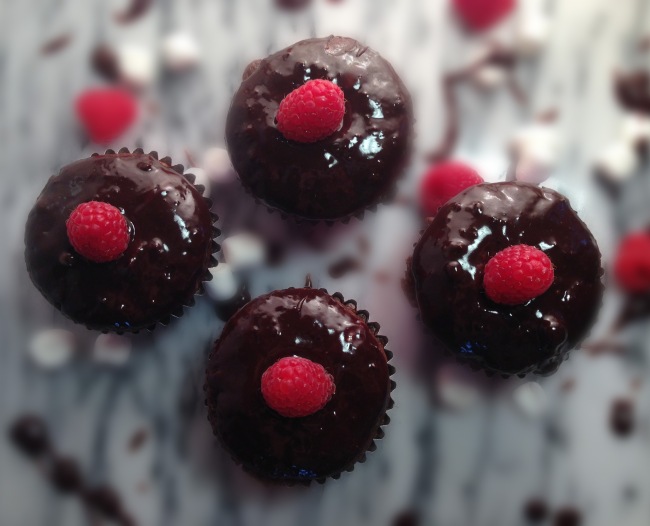 Make the brownie mix as per box.  Bake them as directed.

To make the cream filling, dissolve the salt in 1 tsp hot water.  Blend the fluff, butter, powdered sugar, salted water, and vanilla.  I did this in my food processor.  I then put this in a Ziplock bag & cut a corner out.  I used this as a make-shift pastry bag.  A real pastry bag would be great, too.

When the brownies are done & cooled a bit, use a paring knife & create little cavities in their centers.

Squeeze some cream filling into each.  Fill to the top & let rest a bit.  If the cream settles – either add more cream or shove a raspberry in there like the killer on Twin Peaks used to shove a tiny letter under the fingernail of his/her victims (remember that?). 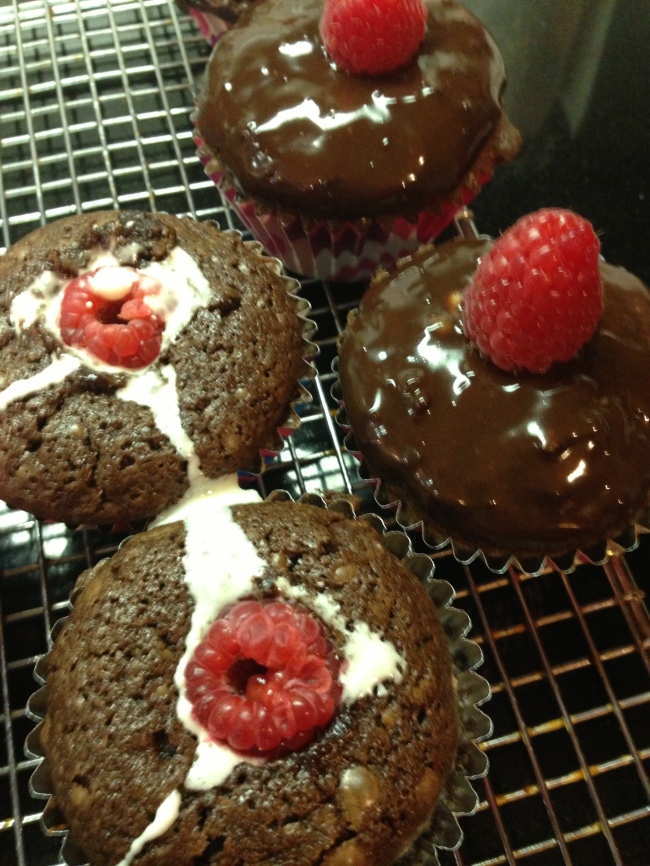 Over low heat, melt the chocolate chips.  A double boiler is best for this but I was lazy.  I melted them a bit & then just added the heavy cream & whisked it all together.

Dip the cupcakes into the ganache & then top with another raspberry.  Voila!

These are also good to roll around on nude but that can get awkward at a birthday party.  Maybe just stick them all on a tray & serve them the traditional way. 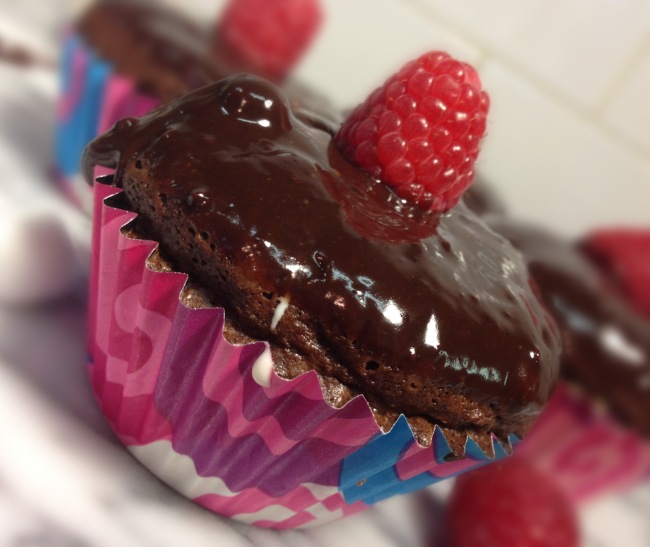