I usually find faux meats to be pretty useless.  The texture is never convincing & the flavor is typically kinda yucky.  You need a lot of other things going on in the way of sauces & spices to fool even those, like myself, who are very eager to be fooled.  I’m no ball-buster on this front.  I accept Diet Coke as a substitute for Coke (though I seldom drink either of those toxins – preferring to poison myself with the sugar & other bad elements of a bottle of wine).  I accept veggie dogs & veggie burgers as the phony version of their animal-based counterparts – even though I know no meat eater would ever be tricked.  But the faux chicken patties & fake buffalo wings & fake bacons are entirely unacceptable (excepting the chemical-burn-producing BACOS – which I love – and will eat out of the jar – embracing the stalactites of flesh that dangle from the roof of my mouth afterward as a small price to pay for the sensation of eating bacon).  Until recently (because of this report HERE on Fukishima & the west coast of the US) – I preferred to use various seafood items in place of meat but now even that has been taken from me.  And, frankly, this blog is like a insatiable zombie.  Like this zombie protest – 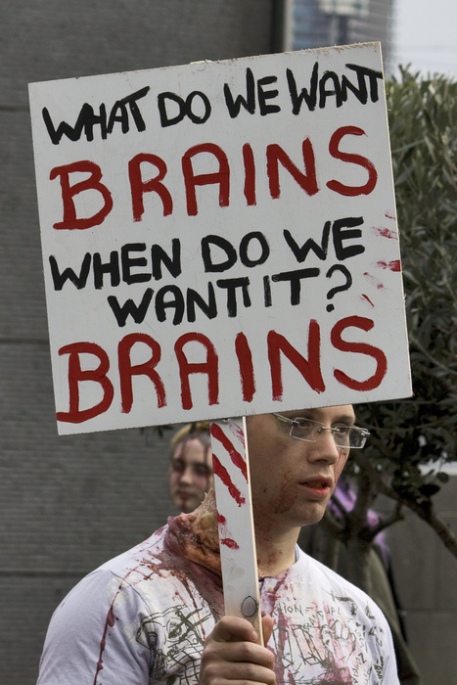 this blog makes similar monomaniacal demands of me – but it demands new recipes instead of brains.  Not a vegan & not a meat eater – I am, I guess, a new vegetarian after 20-25 years of identifying as pescatarian.  Anyway, it gets hard to come up with new things to make all the time when so much of the average person’s diet is off my menu.  When I add in calorie considerations (a gal cannot live on mac & cheese and pizza forever without repercussions) and then other foods I am trying to avoid – like corn and soy – which Monsanto is starting to scare me off of – and then add budget considerations – I sometimes find myself in a culinary no-man’s land.  So – in a moment of desperation, I bought these Trader Joe’s Beef-less Strips. 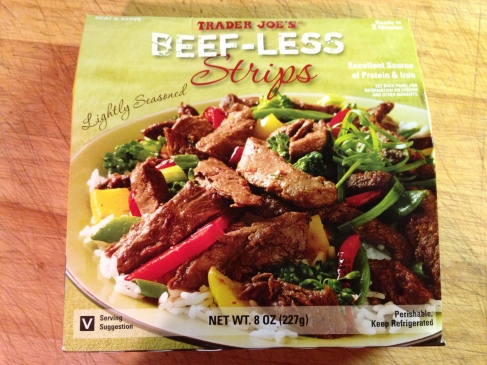 I know.  They contain soy.  But fuck it.  I had little hope that these would be any more satisfying than other items of this ilk, anyway, and so they sat in my fridge for weeks.  Finally, last night, I decided to mix them up with some broccoli & make an Asian-inspired beef dish.  I broke down (out of laziness) and picked up a container of steamed rice from a local Thai joynt – even though I try to avoid white rice as much as possible, too.  (Are you beginning to understand the too-much-information foodie-world I have gotten myself into?)

The resulting dish might be one of the tastiest & easiest recipes I have ever posted!

I steamed the broccoli separately.  I recommend this highly as a way to avoid overcooking it & to keep it from turning an unsightly dark brown color from the sauce.  You can use any kind of rice you like – or put this over noodles of some kind – but try it!

This is a REALLY easy dish to make.  It made my house smell like a Chinese restaurant (in the best way) & this fake beef shit was so shockingly good – it was all I could do not to eat the entire recipe in one sitting.  The leftovers were even better today & I wasted no time devouring them.  If you eat actual meat – feel free to use that.  I think you will be blown away by how Goddamn tasty this fucker is.

Ultra Easy Vegan (or not) Spicy Mongolian Beef with Broccoli

Steamed rice of your choice

Make the rice & set aside.  Steam the broccoli in about 1/4 inch of boiling water – in a covered pot – for about 2 minutes.  Drain & return to dry pot, cover to keep warm & set aside.

Toss the fake (or real) meat in just enough cornstarch to cover it.

Heat 2 TBS olive oil in a large saute pan.  Add the crushed red pepper & the meat.  Fry the meat until the outside begins to brown or get a bit crusty.  Maybe 3-5 minutes.  If using real meat – cook it to your desired doneness.  Put the meat (real or otherwise) on a plate & set aside. 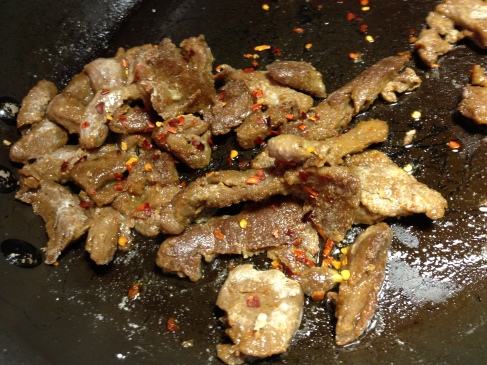 Lower the heat on the pan to med-low.  Add the garlic & ginger & let saute about a minute & then add the water, soy & sugar.  Increase heat to a boil. 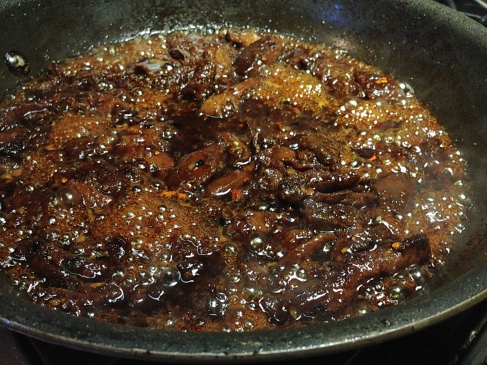 The sauce should thicken pretty quickly.  Add the cooked meat.  Toss with the broccoli or serve the broccoli as a side.  Add some rice to the situation & eat the two servings on your own.  Get drunk & start shit-talking on Facebook about what a badass, cooking muthafuckah you are.

It happens.  Don’t judge yourself.