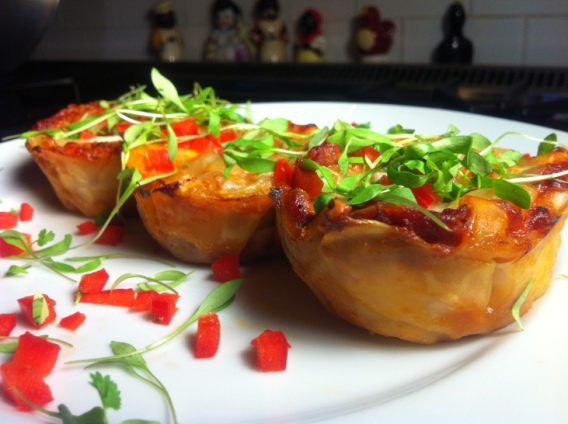 See that picture above?  Yeah – that’s micro cilantro on there – not basil.  I paid $5 for a container of micro cilantro & intend to get my money’s worth – even if I have to garnish dessert recipes with it!  I don’t care.   Anyway –

These lasagna cupcakes are super easy to make – once you have assembled the ingredients.  You can also modify this recipe endlessly to reflect your own favorite lasagna recipes.  The only real NEWS here is the concept of using a cupcake pan & using wonton skins instead of pasta.  I am certain this can be made using actual pasta or adding meat or with a white sauce – whatever.  Also – I tried this two ways – 1) leaving the wonton skins square & folding them down over the top creating little closed baskets and 2) cutting the wontons round with a cookie cutter so that they were layered more like a Neapolitan.  The result was two more different little lasagnas than I would have guessed.  The square wontons resulted in a cupcake far easier to remove from the tin (the round ones needed more cooling time to be removed & still retain their shape).  Also – the added wonton quantity in just keeping the squares in tact made those cupcakes more bready – for lack of a better word.  The round ones allowed the flavor of the sauce to come through more powerfully – primarily because there was less wonton flavor competing with it.

Also – if you use a jarred sauce & store-bought ricotta – you could assemble a tray of these in the time it takes your oven to heat up & then cook these cook in under twenty minutes.  They are elegant & different & EASY and pretty and delicious.  This recipe below made 24 cupcakes.  Each person I served had at least two.  Serve with a nice salad & some crusty bread & a box of wine & you are good to go!  This recipe is broken into three parts: sauce, ricotta & cupcakes.  If you are using store-bought sauce & ricotta – buy two jars for the 24 cupcakes & 1 lb of ricotta.  Also  – I used some canned tomatoes in this recipe because I already had them.  I will try to avoid using them in the future.  Read why HERE. 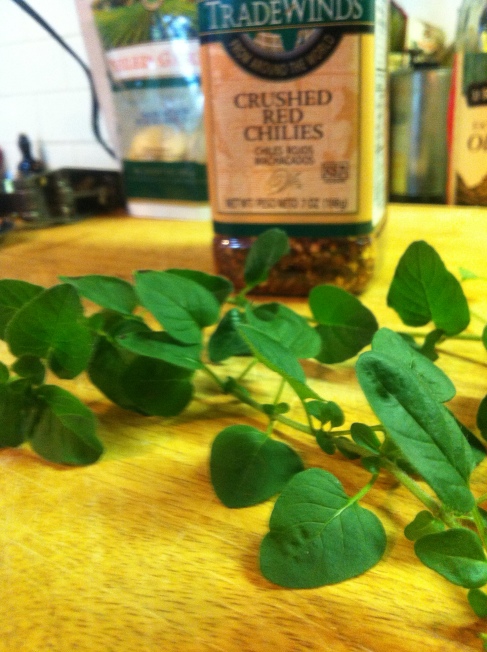 1 TBS crushed red pepper (for a very spicy sauce.  Use LESS if you want less heat)

Heat the oil in a deep sauce pan.  Saute all the garlic until the minced garlic begins to turn golden.  Add the tomato paste & stir over high heat for about a minute.  Lower the heat to medium & add the rest of the ingredients.  This sauce was very spicy with the full TBS of crushed red pepper – so ease into using the red pepper & add more according to your own palette & tolerance.  Bring this to a boil & then cover & lower heat to low & let simmer – the longer the better.  I made this a day in advance & refrigerated it overnight – letting the flavors blend – but this isn’t necessary.  Let it cool before assembling the cupcakes. 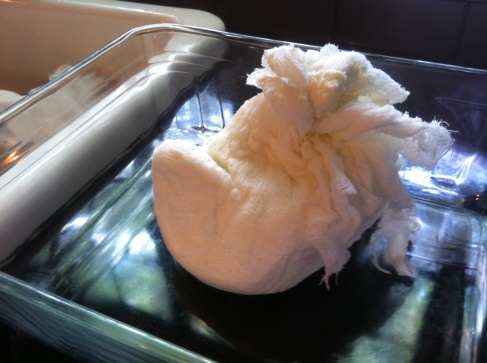 Make this in two batches.  Divide the ingredients in half & do it in two batches.   For some reason – doing it all at once produces less ricotta.  Sounds crazy – but my friend tried & agreed.  Plus – the half batches are more manageable to dry in the cheesecloth.

Heat half the milk & half the buttermilk in a pan.  When it just begins to bubble in the corners – turn off the heat.  Add half the salt & half the vinegar & stir.  With a slotted spoon – scoop out the curds that form until all that is left is the yellowish whey.  Alternatively – CAREFULLY pour the curdling milk through a cheesecloth-lined colander.  In either case – let it cool a bit & then wrap it up in cheesecloth and squeeze out as much moisture as you can.  Repeat with the other half of the ingredients.  Unwrap the ricotta from the cheesecloth & put in a bowl & set aside (or chill).

4 cups pasta sauce (the recipe above or two jars)

Spray your cupcake pans with a nonstick spray.  Place a wonton into each cup – letting the corners stick up & out.  OR – use a cookie cutter & cut the wontons into circles the correct size for your tray.  Layer with a little grated Parmesan, then ricotta then sauce.  Add another wonton – putting the corners in the opposite direction the first wonton was placed and press it down on the first layer.  Add another layer of Parmesan, ricotta and sauce & top with another wonton.  I used a round-cut wonton for this top layer even if I left the corners on for the first two layers.  Top with some sauce & then press the corners of the wontons down into the sauce so the cupcakes all stay “closed.”  Be sure a little sauce is covering the entire surface.  Top with a sliced disc of fresh mozzarella.

Put these in the oven & bake.  Check them at the 15 minute mark.  They should be done in between 15-18 minutes.  Remove from the oven & let sit & set & cool for five minutes.  Carefully run a knife around each cupcake & pop them out onto a serving dish.  Garnish with shredded fresh basil & some chopped fresh tomatoes (if you are using them).   If you used all rounded wontons in the Neapolitan style – let sit longer than 5 minutes as this version is more smooshy & fragile.  The squared wontons look prettier – as you get a nice golden “crust” around them but both version are delicious!