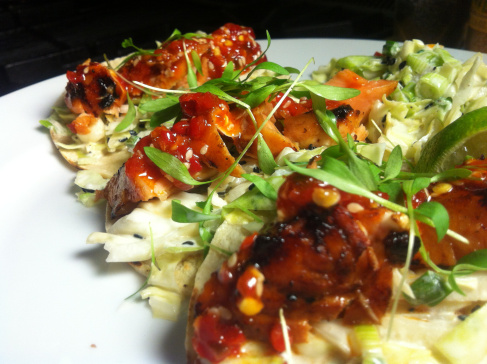 Again – I found myself with ingredients & the desire to create something unique from them.  I had some old salmon in the freezer & two giant bags of small corn tortillas and a fat ass.  What could a girl do with those ingredients?  Hmmmm…fish tacos & a smaller ass?  Tacos are a surprisingly good choice if you are hoping to have a healthy meal.  Three of the little taco-sized corn tortillas have about 100 calories – combined.  As long as you eschew the cheese and any sour cream or that Mexican Creme stuff (which is delicious) – you kinda can’t go wrong.  And you can even use those – in moderation – and still come out ahead of a sandwich or a salad with things like avocado & heavy dressing.  Also – if you serve them, as I did, with a giant quantity of steamed broccoli or other steamed vegetable (I flavored the broccoli on my plate with a little tempura dipping sauce) – you end up full & satisfied and hopeful that soon, the shadow cast by your ass in the late afternoon sun will become less conspicuous.

So – here is my recipe for Spicy Hoisin BBQ Salmon Tacos with Asian Slaw.  I had two pieces of salmon each about the size of a giant Snickers & didn’t even eat one of them in my three tacos.   So – I guess this amount of salmon might feed three people a light dinner.  Typically, the ratio is 1/2 pound fish per person – so – if serving others – you might want to keep that in mind.

Also -I used micro cilantro – which cost me $5 basically because it looks really pretty, makes my post sound more foodie & because I am trying to impress people & establish my cooking bona fides through smoke & mirrors & exotic sounding ingredients.  But $5 for garnish when a .69 cent bunch of regular cilantro is probably better tasting – is really just silliness.

More silliness?  NEW AGE DRINKS?   Such a supermarket staple that they needed an aisle marker the way bread, cereals, canned vegetables & dairy do?  Who are these folks with a new age thirst?    Are they coming right from yoga or an ashram or a Deepak Chopra reading?  I Googled it & got some Time magazine article that seemed to equate new age drinks with smaller distributor iced teas.   But Gelson’s seems to think both iced tea AND new age drinks need their own labels so – I’m lost.

Anyway – on to tacos! 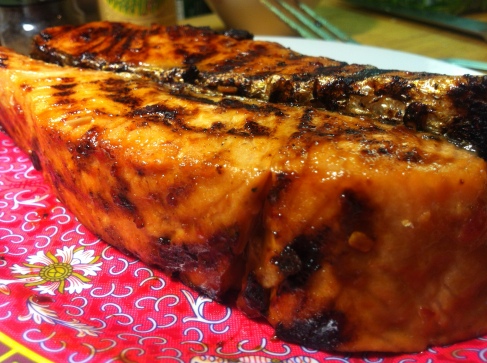 Put the salmon in a something to marinate it.  I used a freezer baggy.  I put the salmon in & then added a good amount (1/4 cup?) honey & the same amount of soy, sambal olek & hoisin sauce.  I sealed the bag, smooshed everything around in there & put in in the fridge all day.

For the slaw – blend the mayo, sesame oil, soy sauce, rice vinegar & pepper.  Mix the cabbage, scallions & daikon & then add the sauce.  Finally – add in the black sesame seeds – if you are using them.  Set aside – or chill if you made this in advance. 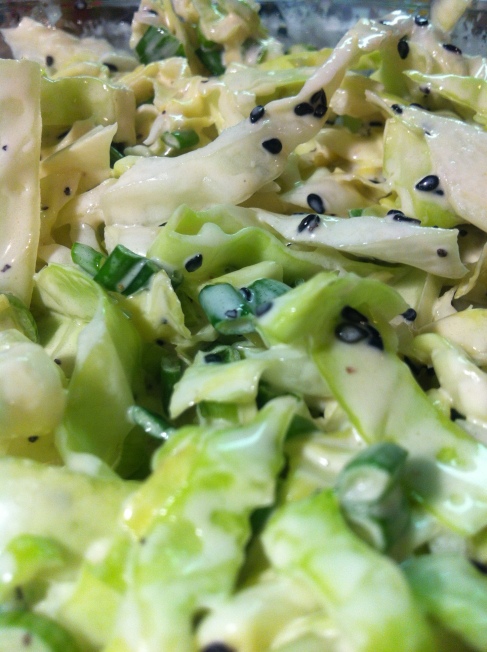 Remove the fish from the marinade but keep the marinade nearby in a bowl.  Grill your salmon a few minutes on each side over high heat.  I used a round grill pan.  I left the center of the salmon rare.  Feel free to poke into the salmon to check doneness – as you will break it up into small pieces later.  You may like your fish more cooked than I do.  Just eyeball it until you think it is ready. Return the cooked fish to the marinade.

Heat your tortillas on BOTH SIDES on a grill or in a frying pan or over your burners until they soften & just start to show browned patches.  Now it is time to assemble the tacos.  You can put a portion of fish (broken into small chunks) & slaw & tortillas on each plate & let folks assemble them themselves – or put everything out buffet style.  I was alone so I assembles the three tacos on my plate.  Easy.  Tortillas, slaw, fish, a drizzle of chili sauce, cilantro & a squeeze of lime.  Shove it in your face.  Enjoy!   PS – the slaw can be served as a side dish, too!